I've always been a library patron no matter where I've lived. As a small boy in Los Angeles; in Burbank, where I grew up; at any Marine Corps Base I was stationed at; at school in Utah (where I had access to a first class university library); in our first home in Laurel, Maryland or here in Springfield, Virginia.

As it turns out, I have now lived in Springfield longer than any other place in my life - so naturally, the local library has been a personal and family destination for years. 27 years, in fact; we moved here in July 1987.

Which brings us to the subject of the Pohick Regional Library - part of the Fairfax County (Virginia) library system. Is it in West Springfield or the adjacent community of Burke? I don't care. I say Springfield, the county says Burke.

It's named after a local creek, the Pohick, which, as you may guess, is an Indian word. It was built in 1986, just a year before we moved into town. All three of our kids have checked out countless books from this place, and so have my wife and I. In fact, I even got the job I presently work at via a 1993 government jobs listing I checked out from the reference desk!

The county's description of the facility is as follows: 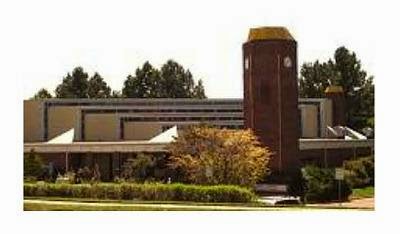 Above: From the library's web page. 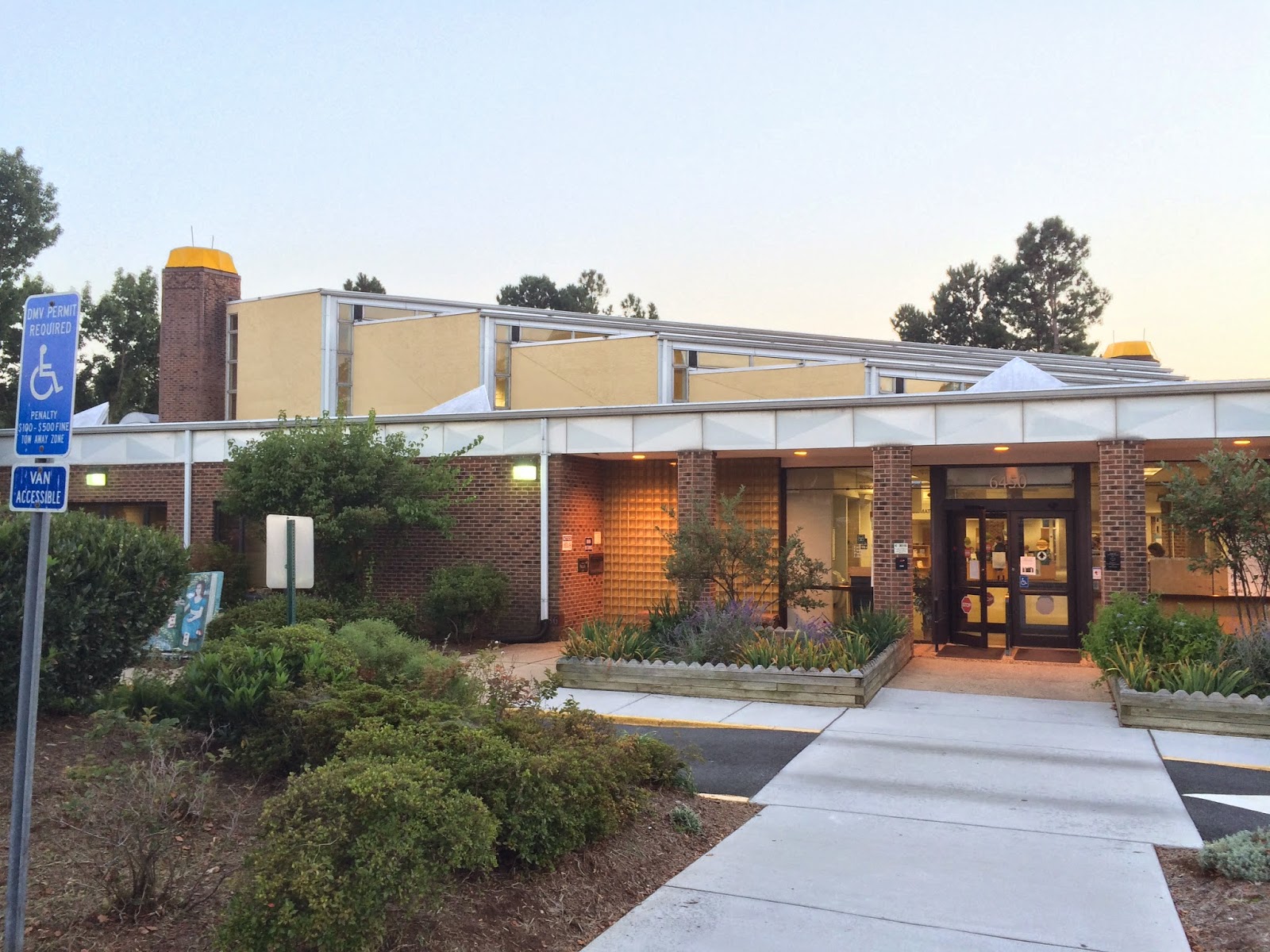 What ugly architecture! What unfortunate post-modernist style is this supposed to be, anyway? Or is it some gormless attempt to make use of geometric objects? 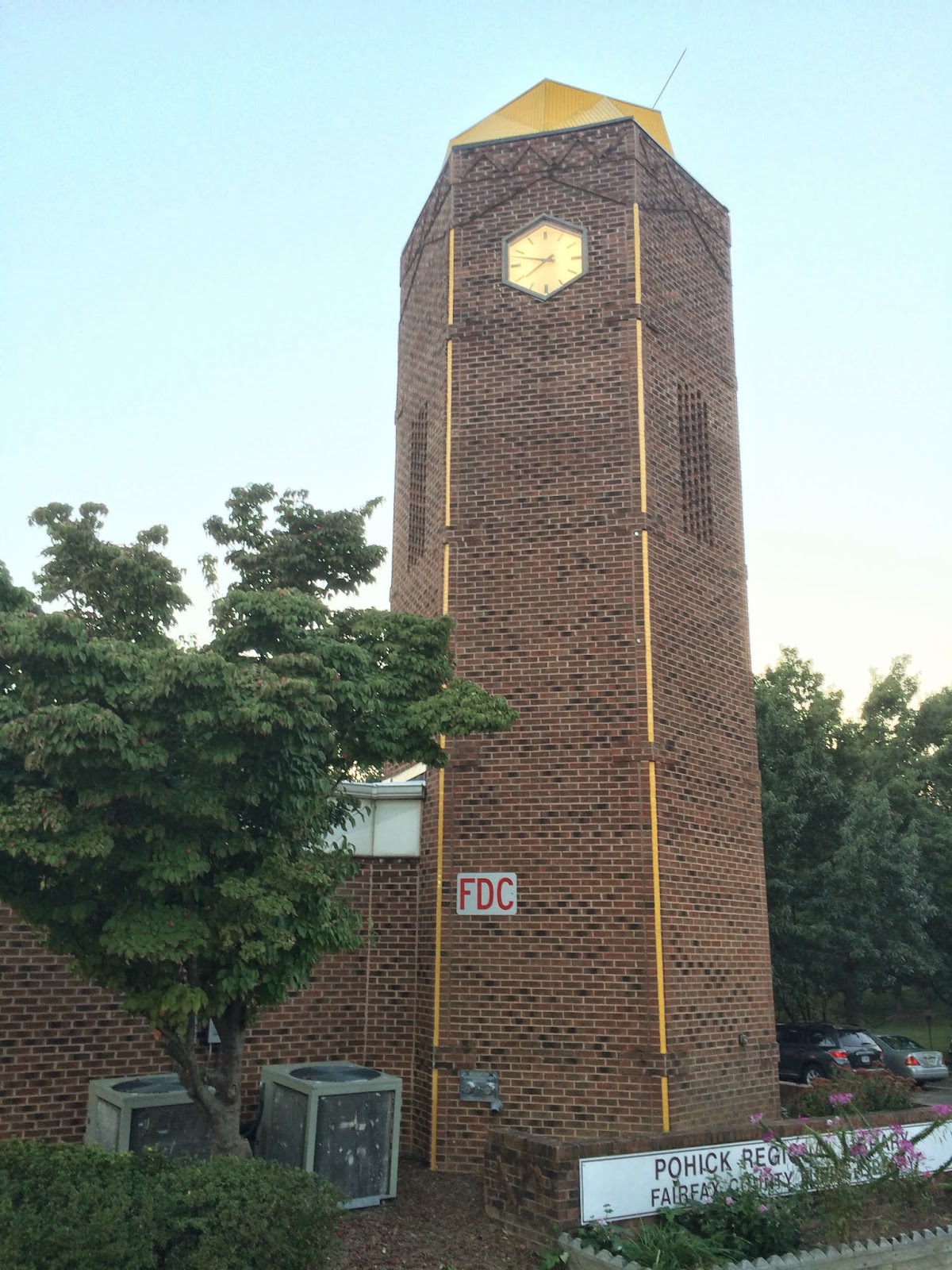 Not only is that clock tower weird looking - note the yellow cap, made with tiles! - but the goofy six-sided clock face isn't telling the right time. So why did they bother at all? And why the yellow tiles going up the tower on the edges, and the silly tile patterns in the middle and... and...

And what's that crooked pole at the top? A lightning rod or a fishing pole? 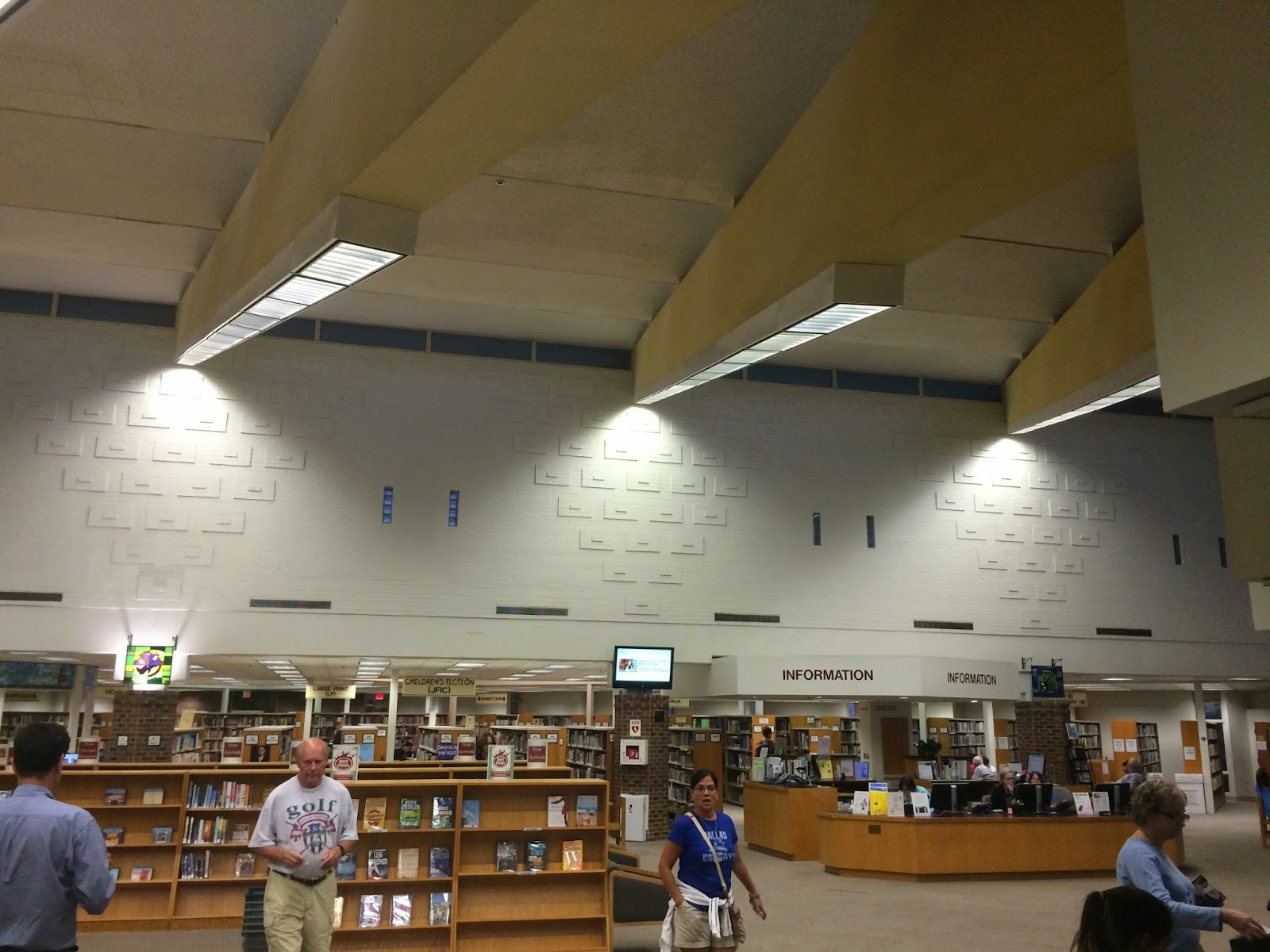 Here's the interior. Lots of space. Big. Cavernous. Weird. Note the odd patterns in the cinder block wall. Best of all, the county gets to pay to heat and cool that useless ceiling space.

I once discussed that non-functional space with a librarian at the reference desk, and she wondered the same thing I did: why didn't they make a second level where more shelves could be placed? 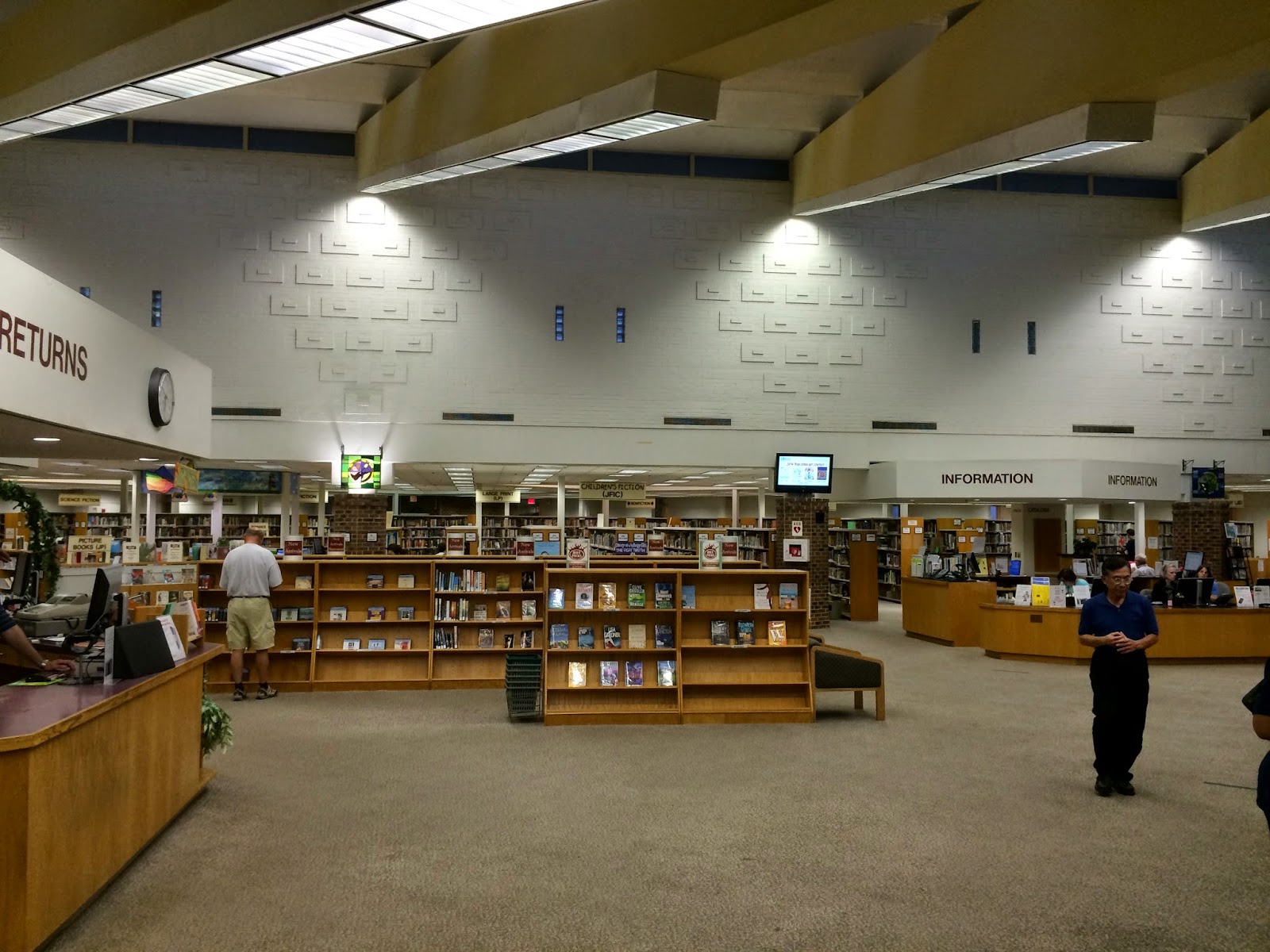 And that cantilevered ceiling with the fluorescent lights attached thereto - why?

The architects were Cross and Adreon; one of the librarians told me - laughingly - that the place once actually received some kind of architectural award! 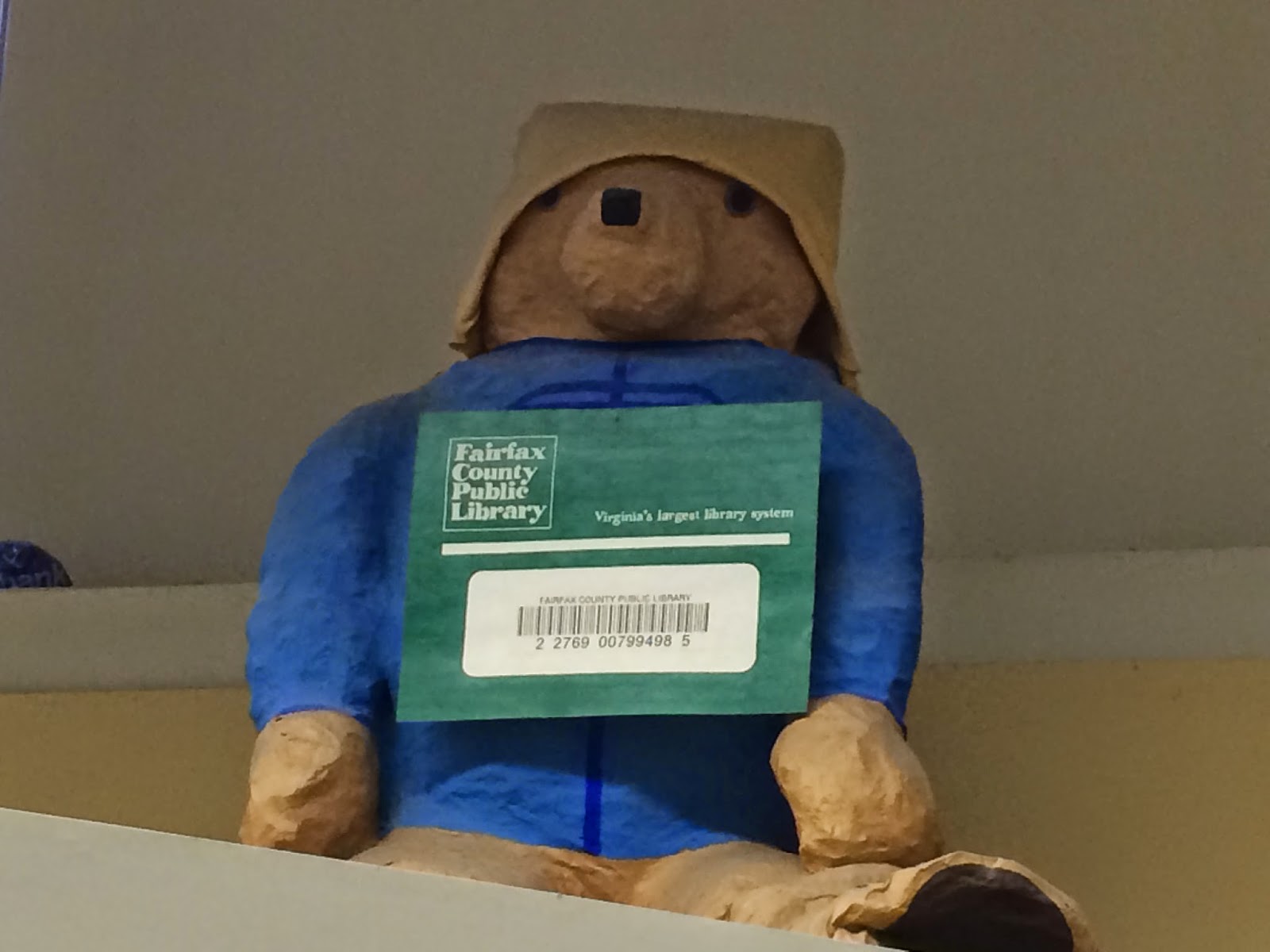 I think, however, what every kid remembers best about this interior is the gigantic papier-mache Paddington the Bear with the library card. I don't think it's ever been dusted.

I am happy to report that this library will soon be getting a major renewal; none of the librarians, however, could tell me if the county is planning to alter the architecture. The facility will be closed for an entire year, so I'm keeping my fingers crossed.


The Yelp.com entry for the library